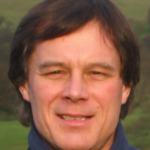 Nigel Goddard worked in Computational Neuroscience during his PhD (at the University of Rochester, Caltech, Hughes Aircraft, and Carnegie Mellon University) and therafter (at the University of Pittsburgh and the University of Edinburgh) until 2003, gradually evolving his work into helping found the field of Neuroinformatics. After a few years as an entrepreneur (co-founder of Axiope, which has become ResearchSpace), he returned to academic research focussed on the key role that energy plays in the modern world using tools from machine learning.  He has been principal investigator and co-investigator on numerous research and training grants, including study of parallel simulation tools for computational neuroscience (which led to the NeuroML standard), co-founding the EPSRC Doctoral Training Centre in Neuroinformatics (2002-2017), and establishing the functional MRI facility at the University of Edinburgh. Currently he is PI and Co-I on several grants which study ways to increase the efficiency of energy use in buildings; helps to lead the EPSRC Centre for Doctoral Training in Data Science; is Director of the Institute for Adaptive and Neural Computation; collaborates on resource-focussed macroeconomic models; and continues to provide strategic advice to ResearchSpace.