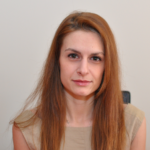 Maria is a travel demand modeller. Her areas of research include travel behavior modeling, transportation systems analysis, novel mobility services and business models, active transportation (walking and cycling) modelling, social networking and traveling, demand analysis, market research and econometrics. She has extensive experience in survey design, data handling, and modeling combined Revealed Preferences (RP) and Stated Preferences (SP) discrete choice models, as well as latent variable models in which the attitudes and perceptions of decision makers are taken into account in the choice process. She has worked on various transportation projects in Europe and worldwide. She organizes and co-organizes workshops and campaigns about active transport, green transportation and road safety.

In 2010, she was awarded with the Bronze Medal in YEAR2010 (Young European Arena of Research 2010, organized by Transport Research Arena-TRA) for her research “Exploring Teenagers’ Travel and Driving Behavior in Rural Areas”.

In 2013, she was awarded with the Best Student Paper Award by the Journal of Choice Modelling for the paper “Does Social Networking Substitute for or Stimulate Teenagers’ Travel? Findings from a Latent Class Model” (Sydney, 2013).

She also received the 2013 TRB Ryuichi Kitamura Best Paper Award for the paper “Development of a Hybrid Choice Model to Investigate the Effects of Teenagers’ Attitudes  Towards Walking and Cycling on Mode Choice Behaviour.”

Quantifying factors affecting mode choice behaviour in developing countries and explore the ways and the potentials of promoting bike sharing and car sharing schemes via examining the past, the present and future mobility opportunities

Investigating the demand for Mobility-as-a-Service (MaaS)

Mobility as a Service is a new concept for people’s mobility. The aim of this project is to investigate and model consumers demand for purchasing and using MaaS, as well as its potential impact on private vehicle ownership.

Taking advantage of open data and APIs, a methodology is developed to incorporate transport operators’ APIs and other open data sources into smartphone-based travel survey tools..