3DStock is a completely new kind of threedimensional model of the non-domestic building stock, for use in energy analysis

The 3DStock model’s purpose is to assess energy use in buildings, and study conservation options. Other applications are possible. The techniques have been trialled successfully in the London Borough of Camden and the cities of Leicester and Tamworth. The team is now working on extending the model to large parts of England and Wales. Inclusion of the domestic stock is under way.

This ‘3DStock’ model is built by bringing together two data sets: Ordnance Survey (OS) digital maps, and commercial rating (property taxation) data from the Valuation Office Agency (VOA) of HM Revenue and Customs. The OS maps give footprints of all buildings. The Valuation Office data give floor areas by floor level for the majority of non-domestic premises. The two data sets are matched together by addresses, using Ordnance Survey Address Base, and 3D models are created by piling the floor areas up on the footprints. Building heights are obtained from LiDAR (laser measurements made from overflying aircraft). The use of high-resolution LiDAR allows the external 3D forms of buildings to be defined with some precision. For certain activities, the VOA does not give floor areas and these must be obtained from other sources.

The Valuation Office classifies premises by their overall or primary activity, and breaks down total areas by sub-activities on the different floors. Thus ‘Office’ premises might be sub-divided into areas devoted to office work, kitchens, storage, canteens, computer rooms etc.

The 3DStock model differs therefore from previous models of the non-domestic stock, by combining representations of the 3D geometry and the geography of buildings with details of activities on each of their floors.

3DStock does not however take ‘buildings’ as its basic units, but instead defines ‘self-contained units’ (SCUs), each of which may correspond to several buildings and may contain one or more premises. The virtue of the SCU as a unit is that it does not break premises into parts; it has a well-defined envelope of walls and roof through which heat is lost and gained; and it is (in general) possible to determine the quantities of electricity and gas supplied to the SCU – something that is not always possible with premises or buildings.

The self-contained units are measured to give volumes, exposed wall areas, roof areas and plan depths. For the Camden case study, data are attached giving building age, structural system and materials of walls and roof. Data collected in energy surveys made by Sheffield Hallam University in the 1990s (with some updating) have been used to develop typical schedules of equipment associated with each of the VOA’s sub-activities, and to build a model of electricity use by appliances and lighting. This has been calibrated against figures for aggregate electricity use published by DECC. For many public buildings actual gas and electricity use are available from Display Energy Certificates.

The geometrical descriptions of self-contained units and their material properties are passed to a specially customised version of the EnergyPlus simulation tool, called SimStock. This tool builds energy models, covering heating and cooling uses as well as appliances, for large numbers of SCUs; and tests out scenarios for future conservation options and new supply and servicing technologies.

Sankey diagrams showing the classification of volumes of Self Contained Units (SCUs) in 3DStock for City of London / City of Westminster according to dominant activity, building height and the break down of the mixture of activities. In general terms a SCU can be thought of as a building. 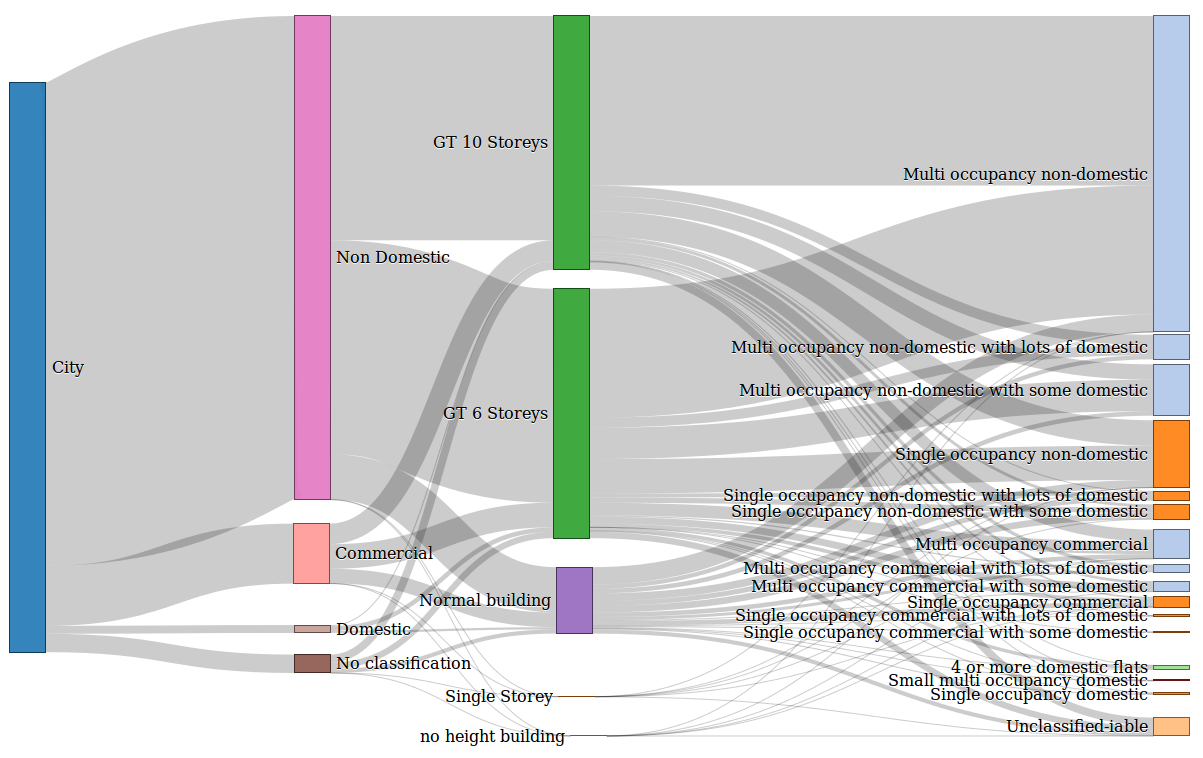 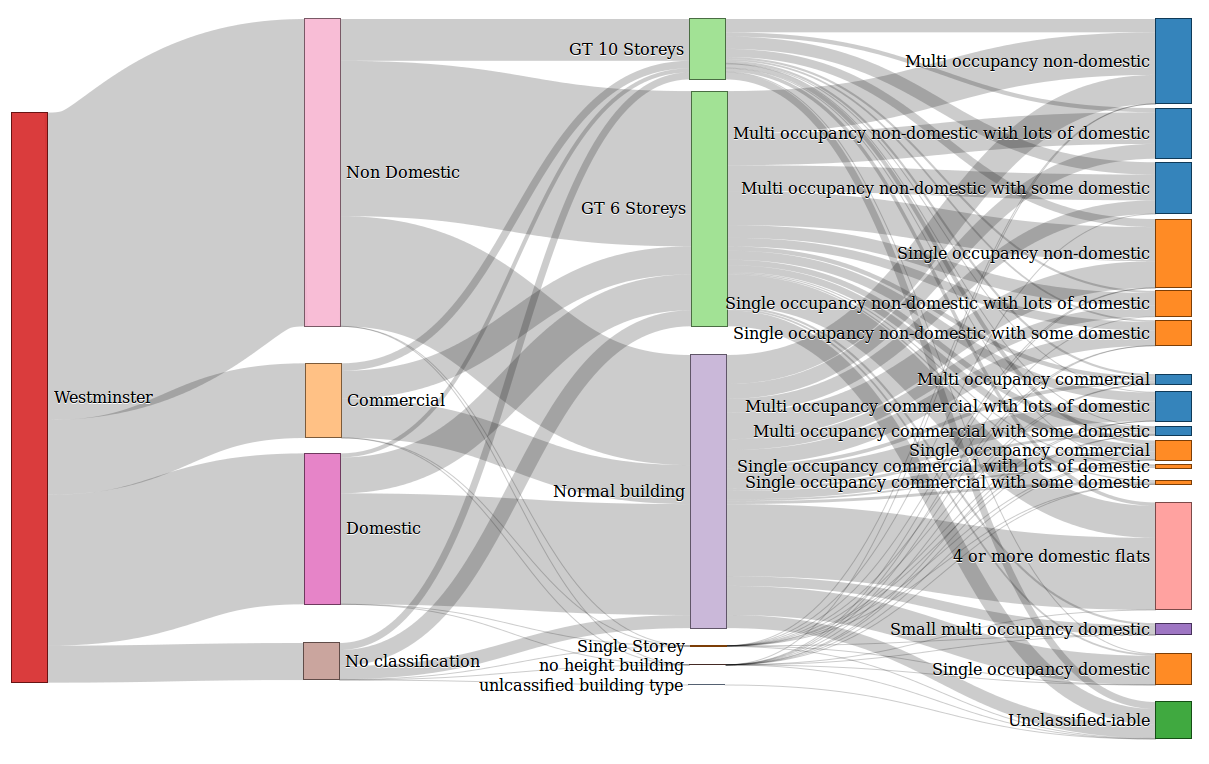